Hair: Does it matter if you are Black, White or Asian?

In the first installment, we looked at physical hair properties and ethnicity. Here is the rest of the compilation!

I previously discussed hair shape and a question arose on hair thickness so here are the figures. The figures do not give the diameter of the hair but rather the area. This is because hair is usually not perfectly round and has several diameters some short, some long. (For easy reading I rounded off the numbers  to the nearest hundred) 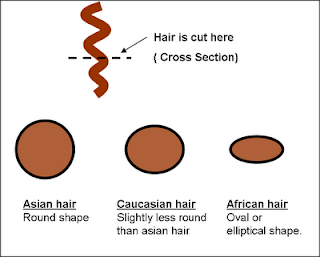 There used to be theories that curly hair
1. Gets its curl from having more of certain amino acids which allow it to twist
2. Is brittle because the hair lacks strengthening amino acids

Both of these theories have been proven to be wrong since hair across the races is made up of very similar quantities of amino acids.

3. Hair Strength
Hair strength studies are another contentious subject. There have been four independent tests in different labs. The results