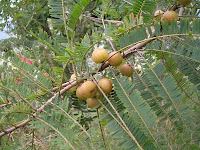 Amla is an edible berry found widely in India. It is a hugely popular ayurvedic ingredient perhaps because it can be eaten! Amla as a fruit is rich in vitamin C and oil can be extracted from its seeds.

Amla oil has recently been shown to be an effective antifungal killing several types of fungus. Interestingly the same study showed that coconut oil too has antifungal properties. In some cases amla oil outperformed coconut oil but in other cases coconut oil took the trophy. The authors theorise that fungal infections such as ringworm are relatively rare in India due to widespread use of these oils. (Mycoses, pp 363 - 369, 2009).

I also found two suspect studies, I say suspect because the similarities between the two are striking including nearly identical results. In science, it is not the norm to find this, unique work is expected and if expanding a previous study then authors have to mention this. However, these papers indicate that amla when used in combination with other herbal oils such as brahmi and methi can promote hair growth similar to the hair loss drug minoxidil. (Journal of Chemical and Pharmaceutical Research, 2009, 1(1): 261-267 and E Journal of Chemistry Vol. 5, No. 1, pp. 34-38, January 2008).