I am currently trying to unconfuse (I know its not a word but it should be!) myself regarding glycerin. I have found two papers one saying glycerin doesn't penetrate hair and the other saying it does. I have to sit down and digest this research a little more before I post it up.

Therefore, I'll start answering some of your questions so far instead on something I actually understand..........coconut oil!

Marie Grâce asks, does coconut oil have moisturising properties? Nneka asks, if coconut oil fully penetrates the shaft then is it appropriate to use it as a sealant?

I'll answer these questions with a diagram. Moisturising in cosmetic research is not about adding water to hair but rather increasing or maintaining the hold of water. Water needs companions to be upgraded to a moisturiser (Now Beyonce's song is in my head...let me upgrade you). 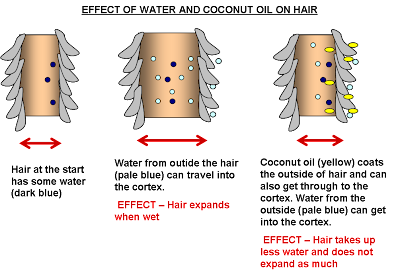 Here is the deal with coconut oil

1. It does penetrate the hair but this does not stop it from coating the outside of the cuticle which it does. The amount of oil that can enter the hair is limited, so naturally most of the oil will sit on the surface. J Cosmet Sci,52(3):169-84 (2001).

2. Coconut oil has been used as a prewash treatment in half head tests where half the head is treated with oil and the other half isn't. The hair was combed post wash and there was significantly less damage/breakage on the coconut oil treated section (meaning much much less protein was collected from the comb). J Cosmet Sci., 50, 327-339 (1999)

So the debate will always rage on about whether oils are moisturising or not. I think that coconut oil is unique because much like water it can penetrate the hair. It's moisturising properties arise because it is an oil and therefore can help the hair hold on to the water. I don't think that coconut oil can be used on its own though, I think it needs some companions too......like water.

I thought I might answer another question on which oil would be best to seal but this post is getting long, my brain is shutting down and I am beginning to sing some more Beyonce songs. I'll leave it here for today......Happy Friday all!
Email Post
Labels: Friday is Mail Day Moisture Bumper Issue