This week's travels into deep science was triggered by this beauty brains post which said that mixing olive oil and coconut oil might be beneficial. They say,

'It’s possible that the olive/coconut oil combination might even penetrate hair better. I won’t bore you with the details, but it has to do with mixed micelles' What are mixed micelles you ask? 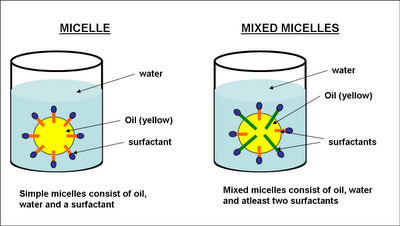 In my opinion, this doesn't make any chemical sense. Mixing two oils is like mixing two liquids. For example if you mix apple juice and orange juice, you just get a liquid mixture. Just like if you mix olive oil and coconut oil, you just get an oil mixture. To form a micelle, there needs to be a water phase AND a surfactant (remember oil droplet forms with plain water). To form mixed micelles, then we will need two surfactants. I did look for sources to find out if anything has been published to justify the beauty brains statement and I didn't find anything. I would love to see a reference for this statement, I can only say I searched and didn't find anything.

I actually don't disagree with this part but first let me make one more gripe I have with this post clear. The paper cited by the beauty brains which I have quoted here before actually only talks about coconut oil and mineral oil. They didn't do their homework properly on this one. Yes, in case you are wondering, I have actually left a comment on their site directly when I saw their incorrect work referenced on two other blogs.

So, Would mixing coconut oil and olive oil make a more penetrating mix? (Get ready for some geekness)

Yes this is a possibility, just not through mixed micelles. I think an alternative theory is the 'free energy' theory . In chemistry, it is a general rule that everything tries to have as low an energy as possible. It is possible that part of the reason why coconut oil will combine with olive oil is because the combination has a lower energy than coconut oil or olive oil on their own. A lower energy would perhaps allow the oil to penetrate easily as it will receive less resistance as it tries to squeeeze under the cuticle.

So it works? I don't know, it is just a theory

What other mixtures would work?

Coconut oil is the only oil which has actually been 'seen' inside the hair. There are theories that other oils which contain saturated fat are probably able to penetrate hair (because the bonds in the saturated fat can move easily). Therefore I would probably rate avocado oil higher than olive oil. Possibly a coconut/avocado oil mix? Again though this is a theory........!

In conclusion, I do actually love the beauty brains, this is why I have them as one of my links. I would actually say that this is the only post on their site which irritates me because it is innaccurate. I would love for them to do the correct scientific thing and simply acknowledge it is wrong and either fix it or delete it. I do still read their site regularly and I like their writing.
Email Post
Labels: Avocado Oil Coconut Oil Oils